Death in a Desert Land by Andrew Wilson

Andrew Wilson’s series of mysteries featuring Agatha Christie as a detective are hugely escapist and enjoyable. They stand not just as curiosities but as decent novels in their own right. While Agatha Christie has solved several crimes in print and on screen – especially in the last few years – Wilson’s series is set apart from the others by the skillful blend of three key components: historical research, literary research, and genuine affection for the author and her legacy. 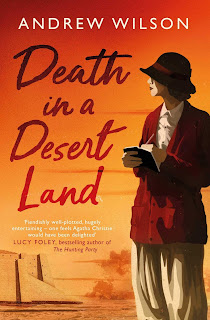 I count Andrew as a personal friend, and he’s been in my life longer than he knows: one of his first books, Voices from the Titanic, provided a hefty chunk of the backbone to my MA dissertation. So I am delighted to report that Death in a Desert Land (2019) lives up to its Golden Agey title and the beautiful dust-jacket artwork. I read it in one sitting, appropriately enough on what felt like the hottest night of all time and, perhaps less appropriately, to the backdrop of a thunder and lightning storm.

This third instalment in the series sees Agatha Christie in 1928, encouraged by the Secret Service to travel to Ur in Iraq, investigating the death of Gertrude Bell (Bell, who helped found the modern state of Iraq, was, in real life, found dead of an overdose in 1926). At Ur, she meets an eccentric and international cast of characters, and discovers that no love was lost between Bell and the dig’s own ‘belle’, a certain Katharine Woolley.

At this stage, the committed Christie enthusiast will squeal with recognition, because the real Mrs Woolley has made almost as much of an impact on us as she did on the real Agatha Christie. It is common knowledge – so common that no one bothers citing a source – that the first victim in Murder in Mesopotamia (1936) was based on her.  If you are a die-hard Agatha Christie fan, you will spot the murderer a few chapters in, simply by whittling out the real people and identifying applying a bit of plot insight gleaned from Christie’s own work. This does not in any way spoil the clue-hunt, as knowing what you’re looking for is just as enjoyable as, if not more so than, going in blind.

There is a subtle shift in scope between Wilson’s previous two novels and Death in a Desert Land. While A Talent For Murder and A Different Kind of Evil reminded me in many ways of Nicola Upson’s Josephine Tey Mysteries – even having similarly titled first instalments (Upson kicked off in 2008 with An Expert in Murder) – this third entry harks back to the technique David Pirie applied in his Murder Rooms series. In Pirie’s books, and the television series, Arthur Conan Doyle solves various mysteries that bear striking similarities to the Sherlock Holmes stories he would go on to write. In Death in a Desert Land, Agatha Christie inhabits a mystery that bears more than a little resemblance to Murder in Mesopotamia and, surprisingly, to one or two of her later novels including A Caribbean Mystery (1965).

In fact, I wondered if there was a bit of sailing close to the wind. When a water glass filled with hydrochloric acid turns up on the camp site – exactly as it does in Murder in Mesopotamia – ‘this’, Christie says, ‘is beyond anything even I could have dreamt up’, which might suggest that she couldn’t have thought it up; that her creative genius has to be rationalised with external influences. But the last thing Andrew Wilson or indeed Agatha Christie would want us to do is to take their work too seriously.

It is, though, extremely fun and thoroughly satisfying to be in the company of Wilson’s Agatha Christie once again. She is a warm and human character, who gives a voice to those of us who shyly observe life from the sidelines. I am looking forward to the next instalment, Who Saw Him Die?, which has already been written for publication in 2020. In particular, I’m hoping that a certain Max Mallowan might crop up…

Meta Matters
The whole thing is a meta moment.