The Double Snare by Rosemary Harris 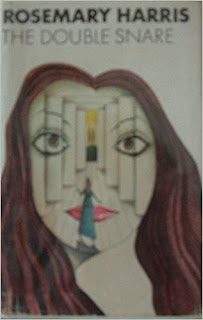 Rosemary Harris, now in her nineties, is not a particularly well-known name any more but, once upon a time, she was a popular and prolific writer for children. In a reversal of the familiar pattern trod by Gladys Mitchell, Dorothy L. Sayers, Agatha Christie, and others, she earned her bread with children’s literature and also wrote crime novels. Specifically, she wrote a handful of psychological thrillers.

I came across The Double Snare (1974) on a charity book shelf in a high street shop and picked it up because it looked interesting. That night, I dipped in and stayed up until 6AM, when I’d turned the final page. That’s not to say that this is a particularly gripping novel; it probably says more about my current state of mind —  this is my version of late-night Netflix bingeing.

The novel is narrated by a twenty year-old woman with amnesia. Following a car crash, our heroine - named Maria by the nurses in her Italian hospital - wakes up with no memory of who or where she is. All she has is a showy handbag, a raggedy dress, and the memory of a single name: Robert. Before long, a wealthy Italian family claims her as their wayward daughter Guilia, and she is taken away to live with them. However, when Guilia’s secret boyfriend throws stones at her bedroom window, it becomes clear that she is not who they say she is.

A complex plot unfolds involving the theatre, free love, drugs, art theft and forgery, smuggling, and Shakespeare. Lots and lots of Shakespeare. Naming herself Silvia (‘Who is Silvia, what is she?’, geddit?), our heroine hitches around Italy until she runs into someone who recognises her, and then things get more complex and dangerous.

The Double Snare is told in the first person present tense, making it surprisingly contemporary and fresh-feeling. I don’t know why I spent the last pound in my pocket on this book, why I went on to devour it when my TBR pile is almost sky-high, or why I thought staying up til six would be a good idea when I had a 9AM appointment, but I don’t regret it. This is a diverting psychological thriller and it will stay with me in a low-level way.