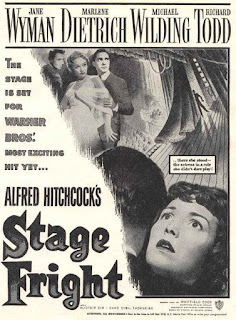 In his podcast on Alfred Hitchcock, Adam Roche laments that Stage Fright (1950) is 'less of a Hitchcock, and more like an Agatha Christie.' Naturally, upon hearing this, I decided I absolutely had to see it! As if to whet my appetite further, I found out that the film also contained Marlene Dietrich, a theatrical setting, and an original song by Cole Porter. Irresistible, right?

The movie, based on a 1948 novel, stars Jane Wyman as 'a very good actress indeed' in training and, reportedly, production was plagued by Wyman's insecurities at being cast alongside the effortlessly glamorous Dietrich. Matters weren't helped by the fact that their scenes together see Wyman's character in disguise as a frumpy maid, and Hitchcock -- as ever -- played on his leading lady's insecurities by showing blatant favouritism to Dietrich on-set.

Eve (Wyman) is accosted mid-rehearsal by an ex-flame, who tells her that he's a suspect in a murder, and she sets out to clear his name. The not-very-complicated investigation involves doubling as a dresser to the diva Charlotte Inwood (Dietrich). Essentially, she puts on glasses and no one recognises her. As she probes deeper and deeper, getting closer to Charlotte, Eve finds herself falling into a very theatrical trap.

At two hours, the film is pacy and suspenseful. It is generally regarded as one of Hitchcock's lesser works, and often dismissed now as a crowd-pleaser (hence Roche's disparaging Christie comparison). Personally, I'd say it was nothing like a Christie, although the presence of Dietrich and a blood-stained overcoat invites comparisons to Billy Wilder's adaptation, seven years later, of Witness for the Prosecution. In fact, as Mark Aldridge reveals in his excellent Agatha Christie on Screen, Hitchcock was originally considered to direct that film.

The direction in Stage Fright is distinctly Hitchcockian, blending light and dark and hamming-up the close-ups, which neatly covers over a disparity in acting styles and prevents the stars' egos from overshadowing their performances. It is understandable that not many people seek out Stage Fright, but the film is worth seeing if you get the chance.