Every Three Hours by Chris Mooney 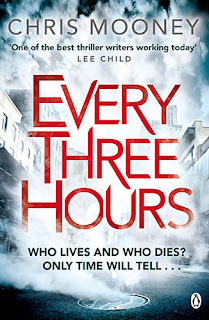 Chris Mooney, not the journalist, is a Boston-based thriller writer who has sold over a million books. Mooney has been praised by all the giants of macho thriller writing, from Lee Child Michael Connelly to John Connolly. His series detective, though is a woman, who appears in eight books, of which this is the sixth.

Every Three Hours (2016) is certainly an easy read, the equivalent to watching Blindspotin that Chris Mooney is joyfully unafraid of the cliché. The story: a masked individual in a suicide vest takes hostages at a police station in Boston and the only person the bomber will talk to is Dr Darby McCormick, a forensic investigator.

The gimmick here is that every three hours, until a full list of demands are met, a bomb will go off in an unnamed Boston location. However, the bombs don’t really come into it and it’s almost as if the author got bored of that idea but couldn’t be bothered to rewrite it, or was already stuck with the title, because after a while the bomber just starts handing out locations and codes for diffusing them.

The whole thing is enjoyable enough and nothing special, although the final chapter raises the philosophical stakes to something slightly above a standard thriller.
Posted by A Sign of the Crimes at 11:44