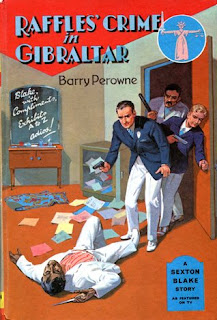 Poirot Investigates (1924) by Agatha Christie. It's been said that Arthur Conan Doyle should have stuck to writing short stories and Agatha Christie should have stuck to novels. The mysteries are too complex, people claim, to work in a 4,000 word format. Maybe. This was Christie's first collection of stories, originally published in the trendy Sketch magazine and featuring Hercule Poirot, who was becoming a household name. Poirot's on top form here, and the faithful Captain Hastings is wonderfully idiotic. Christie is still trying to write like Doyle, which can be grating. But 'The Mystery of Hunter's lodge' is melodramatic and keyed in, satirically, to debates around psychoanalysis. 'The Adventure of the Egyptian Tomb' is full of entrancing period detail.

Raffles' Crime in Gibraltar (1936) by Barry Perowne. Perrowne, a pseudonym for Philip Atkey, was appointed by the estate of E.W. Hornung to write new novels and stories featuring gentleman thief A.J. Raffles. This is one of his two novels pitting Raffles against the ever-popular poor man's Sherlock Holmes, Sexton Blake. Raffles' Crime in Gibraltar is par-for-the course pulp. It's enjoyable enough, with obvious padding in places... and cigarettes are lit whenever dialogue needs breaking up. Full of sinister foreigners and implausible chases, it is forgettable. As it was designed to be.

Endless Night (1967) by Agatha Christie. A masterpiece. A psychological thriller, a literary novel, and everything they say she couldn't write. It's hard to believe Christie was 77 when Endless Night came out. Slap a random name on the cover, change a few details, and release it to day: it would become an instant bestseller and then a classic in its own right.

Monk's Hood (1980) by Ellis Peters. 'It was now imperative to find the murderer, otherwise the boy could not emerge from hiding and take up his disrupted life.' The third Brother Cadfael novel features a mysterious poisoning. Try as I might, I cannot get into these books. The writing style fails to engage me, although I have enjoyed some of Peters' short stories, historical or otherwise. However, I shan't be giving Cadfael another chance any time soon.

The Actor's Guide to Murder (2003) by Rick Copp. A mostly fun, campy crime novel about a former child star in Hollywood and his police detective boyfriend solving another former child star's murder. They are put onto the case by the main character's personal psychic warning that someone close to him will die. Reading it, I developed two theories as to whodunit: one was based on logic and the other on the least-likely-suspect theory. The latter was correct. The solution tries to veer into social commentary which is, perhaps, a mistake, as the author is not as informed on the issues as the glamorous setting. Also, a reference to 'an Agatha Christie pot-boiler' irritated me! But I plan to read the second in the series, The Actor's Guide to Adultery.
Posted by A Sign of the Crimes at 19:15