A Suspension of Mercy by Patricia Highsmith 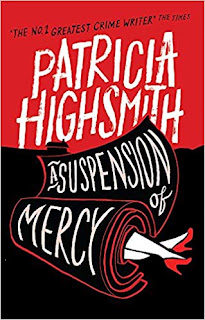 Patricia Highsmith (1921-95) would not like being featured on this blog, as she strongly resented the label 'crime writer', and, if we interpret crime fiction and detective fiction as roughly synonymous (as Highsmith Certainly did), A Suspension of Mercy (1965) is an anti-crime novel. While the central character, Sydney Bartleby, is responsible for three deaths, only the third is actually a murder, and it's the only one of the deaths for which the authorities don't investigate him. A fantastically tense and unsettling read,   A Suspension of Mercy is Highsmith at her lucid, cynical, and misanthropic best.

The tagline on my paperback edition -- 'Who hasn't imagined killing his wife?' -- cannot fail to draw you in. The fact that the image on the cover shows a woman's legs in a rolled up rug only piqued my curiosity; just the other week, my own spouse returned home with an unexplained new rug. It's also set in Suffolk, the English county where Highsmith lived for a while and where I currently live. So, yeah.

Sydney is a struggling writer, unhappily married to Alicia and more fulfilled by his creative partnership with a young man, Alex. While he struggles with creative block -- or, with channeling his creative vision to fit commercial demands for clear plot and structure -- Sydney spends every spare moment fantasising about murdering Alicia. He has it all planned out: the push down the stairs, the disposal of the body, and the cover story. One day, Alicia disappears without a satisfactory explanation, and Sydney sees his private fantasies playing out in the minds of everyone he meets.

One big theme throughout the novel is the problem of trying to narrate and give shape to real life. It doesn't fit. Sydney is proposing a new television series about an antihero called The Whip, who is more AJ Raffles than Tom Ripley. The Whip robs, maims, and kills, but in the service of justice. However, network after network rejects it, repeating that there is too much unfettered immorality on TV and that what the stories really need is a crime-solving detective hero. As Highsmith points out, in various voices, crime-solving heroes are ten-a-penny and real antiheroes are hard to come by.

As Sydney finds his imagined life becoming a reality without his direct agency, his writing takes off and -- although he never realises it -- he starts to sell out; to write in market-ready stencils.  At the end, with fame, riches, and no wife, he's able to separate his work from his unfettered and partway realised fantasies. As the novel concludes, 'everything [i]s a matter of attitudes.'

There is nothing I dislike about this book, and if you haven't read any Highsmith, I'd recommend it as an excellent introduction to her twisted, unique, and vital prose.
Posted by A Sign of the Crimes at 17:46