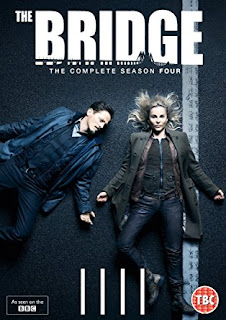 The fourth series of The Bridge is finally airing on BBC 2, so I figured this would be a good time to review it. The other day, flicking through an old issue of my grandfather's Daily Telegraph, I noticed that even the Telegraph -- just a few years after the rest of the world -- has noticed that Scandi noir is
not an eternal phenomenon.  The journalist in question hints that maybe, just maybe, Nordic Noir is on the way out...

Of course, Scandi crime in the UK is so past its peak that Jo Nesbo is writing about Scotland and Kurt Wallander bowed out on Swedish and UK TV in 2013 and 2016 respectively. But many of us wanted, desperately, for the saga of Saga Noren to tie itself neatly together.  The final series took a while to surface, and it's very aware of its own nature as a conclusion, slightly after the fact. Dead characters resurface, backstories are interwoven with the case at hand in a way more obvious than ever before, and minor recurring characters are finally given their own narrative arcs.

When Bron/Broen began in 2011, at its heart was the clash of two geographically and philosophically linked countries, made manifest in the strained relationship of the two co-investigators, the autistic genius Saga Noren (Sofia Helin) from Sweden and the overly emotional Martin Rohde (Kim Bodnia) from Denmark. Bodnia left at the end of Series 2, and his annoyingly formulaic replacement, a drug-addicted cop with anger issues stemming from bereavement, Henrik Sabroe (Thure Lindhardt) ensured that Series 3 focussed more on a clash of personalities. Series 4 makes no pretence: the star of the show is Saga Noren. Nearly all the action takes place in Denmark, but this closing act is 100% her own.

You might remember that, at the end of Series 3, Saga was arrested for murdering her mother. She says, we know, and nobody else believes, that her mother committed suicide and made it look like Saga had killed her. At the beginning of Series 4, two years later, Saga is about to get out of prison, following a retrial at which her innocence was more or less proven. Of course, because this is The Bridge, something goes wrong at the last minute, and Saga ends up seeing a counsellor -- something that starts out amusing and ends up extraordinarily touching.

She also develops her relationship with Henrik and, in a heartbreaking scene, suggests that she might be in love with him. I want to add a note here: this is not like Sherlock or Dexter, both of which suggest that sociopathy can be 'cured' by the love of a good member of the opposite sex and the pursuit of nuclear bliss. It's much more sensitive, and much more grounded. And much, much more brutal. While Saga tries to help Henrik track down his missing-presumed dead daughters (just as he's grown to accept that they are not coming back), she also tries to learn the rules of social behaviour and cohabitation. It all culminates and in an absolutely perfect final scene, which contains precisely two words of ideally-crafted dialogue.

Meanwhile, there is a case. A serial-killer case which strikes close to home. Detectives in Denmark and Sweden are trying to find a link between disparate, apparently motiveless killings: an electrocution, a hanging, a poisoning, and so on. While the link is probably clearer to us than it is to them, it takes Saga Noren to communicate it. And, as usual, the variety of victims and locales provides a perfect excuse for a range of recognisable Danish and Swedish TV faces. Once the link emerges, so does another kind of link: to the Danish police force itself.

A big theme in this series is the construction of identity within familial and local community contexts. One subplot has a woman and her son fleeing an abusive husband, and running right into a cultish community and into the arms of an even more manipulative man. Another has two blue-eyed parents with a brown-eyed son. Everyone has noticed except, apparently, the father, and, of course, it's Saga Noren who actually voices the problem, as an aside in the middle of a routine enquiry. The big subplot is, of course, Henrik's on-off search for his long-lost daughters. For the first time, the cinematography emphasises just how long the bridge between the two countries actually is.

Taken as a whole, the series is cathartic. Every character -- whether they've been in the show from Day One or just for this series -- is given a conclusion, whether that's closure or rebirth. I think the pacing is bizarre. For example, the solution to the crimes under investigation is three-fold. Element one is revealed, thrilling chase included, at the beginning of episode 7 (of 8); element two comes out half way through episode 8; and the final element is crammed into the last five minutes. Meanwhile, we have languorous scenes involving Saga rifling through the paraphernalia of her childhood and learning how to let it go.

This is frustrating in the moment, but when this show does tension, it ladles it on so heavily that you lose yourself in the moment and forget any dissatisfaction. As I mentioned above, the series ends on such a perfect note that it's impossible not to give it one big, convoluted, utterly ridiculous thumbs-up.
Posted by A Sign of the Crimes at 16:34