No Man's Nightingale by Ruth Rendell 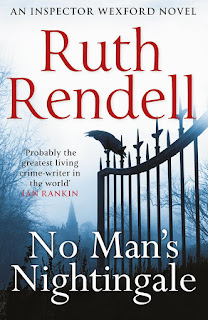 When I purchased No Man's Nightingale (2013) from a 3-for-£5 bin, I had no idea it was the final Inspector Wexford novel. I found myself in Great Yarmouth with a dead phone, three hours early for a rehearsal, so went out looking for something to read.  I have always avoided Inspector Wexford, partly by accident -- it just so happens that all the Rendells I've read have been standalones -- and very slightly by design. The character just sounds so boring to me; a happily-married middle-aged everyman policeman. The idea makes me think of Inspector Barnaby (the screen version), and although I've always hugely respected Rendell's ambitions as a writer, she never quite shed middle-class security, so I always figured that the Reg Wexford novels would highlight her weaknesses rather than her strengths.

Perhaps the final Wexford novel was not the best place to start. It features the man in retirement 'but still involved' in police work. I quite like that Rendell doesn't even try to get round the obstacle she's set herself; she just has Wexford roll up to crime scenes and everyone's fine with it. The police officers even come up with a job title for him: 'Crime Solutions Adviser (unpaid)', which is quite a nice bit of satire.

The crime in question is extraordinarily little-England. This is 2013, but the locals in Wexford's area are not comfortable with the idea of a 'lady vicar'. Rev. Sarah Hussein, who is a convert from Hinduism, upsets so many people by the very fact of her existence that Wexford is hardly surprised when she is found strangled in the vicarage. The police soon uncover a simmering pot of red herrings in the form of racial tensions, misogyny, and, perhaps inevitably, children with complicated parentage. Between investigating the case, Wexford dips in and out of Gibbons' Decline and Fall and reflects on how little has changed in the history of collapsing civilisations. It isn't just the occasional shoe-horned references to The Voice and 'the internet' that show Rendell's aspirations to remain up-to-date; there's also a shrewd alertness to political tensions in microcosm.

Despite the attempts to join the twenty-first century, Rendell is only in her element when she's describing universal and timeless human weakness -- when she's being Patricia Highsmith with a doily -- and that is not what she's doing here. Characters speak archaically ('sex and bodily functions and biology sort of stuff' says one worldly type. It reminded me of PD James's young people in the early 2000s promising to 'summon' one another 'on the telephone'). The internet may exist, nebulous and hardly used (Wexford doesn't understand Google, so that's that taken care of), but smartphones might never have been invented.

What endures is Rendell's canniness in nailing a character in just a few lines. There are some spectacular descriptions ('She was uncompromisingly fat and apparently happy to be so') and some acute ones ('She was a good worker, reliable, punctual and reasonably honest').

As always, the case ceases to matter so much as the character-observation and the grotesqueries of thought after a certain point. The book is not long, but I could have done with it being about 50 pages shorter. Some people say Rendell lost her touch at some point in the 1990s, but her touch stayed until the very end -- my response to No Man's Nightingale is pretty much the same as my response to her very final novel, Dark Corners. Obvious brilliance, with vaseline on the lens.