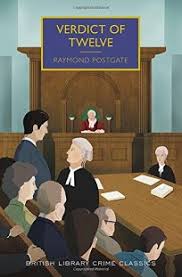 Verdict of Twelve (1940) by Raymond Postgate. An excellent psychological mystery, with two strands: the puzzle of a child's murder, and an exploration of the private lives of the twelve jurors at his aunt's trial. The very first juror we meet has gleefully gotten away with murder in the past, making the whole thing an interesting take on the justice system at an increasingly frantic point in British history. The book is also worth reading for Postgate's ironic self-portrait in the figure of a self-important socialist intellectual, and for his thinly-veiled depiction of his brother-in-law, G.D.H. Cole, as a monstrous gay academic, Dr Holmes. Notwithstanding the presence of three distinct Edwards, it's an engaging and memorable novel.

The Secret Vanguard (1940) by Michael Innes. Unpopularity, I really enjoy Innes' adventure novels. They are so escapist: undeniable page-turners which draw you into a fantasy Britain in which everyone is wonderfully well-read and erudite. The Secret Vanguard is a kind of cross between a detective-mystery and an adventure thriller. There are vaguely-defined German spies and mad scientists who mostly swan around inhabiting John Buchan via the Romantic poets. And Inspector Appleby plays a big role but is, as usual, quite forgettable. The really memorable part is the protagonist, Sheila Grant. Described in the blurb to my edition as 'a most attractive heroine,' she is one of the more interesting, believable, and funny lead figures I've come across in earnest fiction of the late 1930s/early 1940s. I could have done without her love interest, Dick, who doesn't do much but, by virtue of his name alone, leads to some unintentionally hilarious passages.

The Hound of the D'urbervilles (2011) by Kim Newman. Sherlock Holmes's nemesis Professor Moriarty and his own sidekick Colonel Sebastian Moran take the lead in this extravagance of seedy Victoriana. Will appeal to fans of Neil Gaiman, Tape Five, etc.

The Husband's Secret (2012) by Liane Moriarty. The mixed reviews for this book baffled me initially, until I saw the original book cover and realised that many people had expected it to be a love story. Also, being published in 2012, it was slightly ahead of the 'husband' craze in crime thrillers.  That's my best guess: the narrative itself is utterly compelling and praiseworthy.  Our starting point is a relatively normal Australian wife discovering an envelope, addressed by her husband to her, 'to be opened in the event of my death.' The husband is still alive -- can she resist? What follows is a labyrinthine and very human psychological thriller following three sets of people whose lives and deaths intersect. I can't wait to read more by Moriarty.

Holmes Entangled (2018) by Gordon McAlpine. Gloriously accessible Sherlockian postmodernism. During the Second World War, Jorge Luis Borges visits a private detective with what he claims is a manuscript written by Sherlock Holmes himself. Holmes, we learn, was a well-known detective, occassionally helped by a 'middling scribbler' called Arthur Conan Doyle (who has pretty much gone mad, after becoming obsessed with fairies and speaking to the dead). The manuscript reveals Holmes' investigation of claims by Doyle that he was visited  during a seance by the spirit of the still-living Prime Minister. Cracking the case also involves solving the murder of Edgar Allen Poe. The solution lies in poststructuralism and quantum physics. Oh, and Holmes comes up with Schroedinger's cat all by himself.
Posted by A Sign of the Crimes at 13:55