Murder on the Second Floor by Frank Vosper 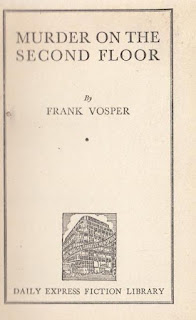 Most Agatha Christie fans know of Frank Vosper (1899-1937) as the colourful character who adapted 'Philomel Cottage' into the Suspicion-esque play, and later movie(s), Love From a Stranger (from an original draft by Christie herself, which not many people know). Really, really keen Agatha Christie fans know that his sister Margery adapted the story 'Accident' as a one-act play, Tea for Three, in the 1930s. But did you know that he also wrote several detective stories and a novel?

Murder on the Second Floor (1929) was probably Vosper's most successful play before  Love From a Stranger. It ran in London and on Broadway and has been filmed a few times, although I've not seen any of these. What I do have is Vosper's own novelisation of the play. I'm not sure when it was published, but the edition I have, from the Daily Express Fiction Library, must have been printed in 1938 because it refers to the author's sad death the previous year. He fell from an ocean liner, the SS Paris, although the foreword in my edition identifies this as the SS Normandie. As Martin Edwards points out on his own recent post on this novel (pure coincidence, I promise!), he talks about Vosper's death in The Golden Age of Murder.

This is a short novel, at 190 small pages with very large text. I opened it up, not knowing what to expect (in fact, I had thought I was buying the play script). The opening paragraph is promising enough:


Meet Sylvia Armitage. She is the heroine of this story. Sylvia is not reclining gracefully in a hammock, attired in a simple gown of flowered muslin, beneath a cherry-laden tree in a quaint, old-world garden. Neither is she sitting on a table, swinging her long, slim, graceful legs, with a cocktail in one hand and a cigarette in a long holder in the other, saying shocking things about biological urges to a horrified aunt. She is not even in a notorious night-club in New York, standing on a table attired in less than half a bathing-dress, with a gentleman's silk hat at a rakish angle on her wicked little head, drinking her own health -- in such liberal potations as must seriously impair it -- surrounded by fifty intoxicated lovers in paper hats, carrying a dozen balloons apiece. No; at the risk of opening our story in a drab and disappointing manner, the truth must be told. Sylvia Armitage is washing-up.

Aha! I thought. Here we have an errant wit. Alas, the paragraph continues, and Vosper so thoroughly milks this clever device that one wonders if the whole idea is to bolster the word count. I'd guess this was a promotional tie-in for the 1932 movie, and such hastily written 'novels' were -- and remain -- a popular gimmick.

Soon, we are introduced to other characters including a suspicious Indian student who may or may not be a dope smuggler and a maid with 'an inferiority complex' who speaks more impossibly like a maid than any maid in the history of ever. This Lucy 'knew her place [...] and her place, poor little soul, seemed such a dull, obscure sort of place as scarcely to be worth knowing at all.' You get the idea.

Sylvia's love interest takes the form of a 'high-brow' playwright, Hugh, who 'looks down on' other people, especially the authors of thrillers. This snobbery dissolves when, at some point during the action, Hugh resolves to write a low-brow murder mystery play.

Once we've got to know these characters, we are introduced to some sinister goings on, involving affairs, an unwanted pregnancy, and drug smuggling, and before long the man at the centre of the whole thing is murdered.  With appropriate comic interludes, the body count mounts, and then a final double-twist makes us see the whole thing in a new, lighter light.

I wasn't sure the comedy or the tension work as well with Vosper's slapdash prose style as I'm sure they do on the stage. Notwithstanding occasional flowery passages, Vosper seems to have taken a similar approach to novelising his own script as Charles Osborne took when he turned three Christie plays into novels. That is to say, he's put the dialogue in speech marks and the stage directions into the past tense and sat back, thinking 'job done'. Job not done. One scene in which a suspect returns from church surreptitiously, trying not to be seen because she has forgotten her false teeth, must be riotous acted out. In prose, it's just bizarre.

There is also a moment quite early on when Vosper tries -- and, to my mind, manifestly, hilariously, fails -- to make a poignant and emotional point out of a rendition of the song 'How do you feel when you marry your ideal?' (you know, the one with the chorus of 'Ever so goosey, goosey, goosey, gooooosey.') 'How does one feel when one marries one's ideal?' Sylvia sighs, wistfully. 'Does he exist. Now if  only Hugh...' Similarly entertaining is the description of the corpse, with more melodrama than a day with my family.  The blood spurts from the victim's neck 'like finest threads of hardened sealing-wax, or the "feelers" of a lobster.'

To solve the mystery -- something I forgot to attempt -- just look for the least likely suspect and you can't go wrong. At the end of the novel, for various reasons I shan't go into here, everyone agrees that the story would make a marvellous play.

Maybe it would. Maybe it did. It did not, however, make a marvellous novel. That said, I'm delighted to have come across this and I got a great deal of pleasure from reading it. Just not the kind of pleasure the author intended.
Posted by A Sign of the Crimes at 18:35